A Tale of a Solution And Three Points of View

What are a vSphere Administrator, a Storage Administrator and a Security Administrator doing having lunch together? They are embracing the new world order. That’s the Data Center world we live in now. There are great expectations that as we move towards Services-based infrastructure that the line between Data Center IT silos is blurring, forcing Administrators from “unrelated” fields to cooperate much more than they did before. Who knows; may be not too far down the road it would only be two of them left.

Let’s talk about a neat (unsupported) feature of Virtual SAN. Virtual SAN relies on the IP Network to provide the transport between its clients (the Operating System such as ESXi) and its servers (the Storage Container, such as the Virtual SAN hosts) to securely store Virtual Machines. The Architecture of Virtual SAN is so that the Configuration Plane resides with vCenter and the Control/Data Planes reside with the Virtual SAN nodes. Or is it? If you read about Virtual SAN in William Lam’s VirtualGhetto (or if you prefer your readings to be in Spanish, pase por la pagina de Leandro Leonhardt, BlogVMware), you will realize (as the vSphere Administrator has) that you can do significant Virtual SAN configurations in the ESXi hosts via CLI. VMware only supports Virtual SAN for nodes that are members of the same vSphere cluster, but what got my attention was the fact that you can add an ESXi host to any Virtual SAN cluster. This would get the attention of the Storage Administrator and the Security Administrator.

So I setup a 3-node Virtual SAN cluster using vCenter (all in the same cluster, following VMware’s instructions), and ssh into one of the nodes to get the Virtual SAN cluster UUID (using the command esxcli vsan cluster get, the field is called Sub-Cluster Master UUID).

In a fourth ESXi host in a different vSphere cluster (doesn’t have to be in a cluster or even the same vCenter but I thought "why not? put it in a cluster one anyway"), I created a VMkernel port using the vSphere Web Client and enabled it for Virtual SAN. I could’ve done this via the CLI but I was feeling lazy. I then ssh into the fourth ESXi host and ran the join command:

I gave it a minute and sure enough the fourth host had joined the Virtual SAN cluster. Just to be sure I did it for a fifth host. Below is the output of the esxcli vsan cluster get in the fifth host.

Back in vCenter…let’s just say that it wasn’t happy. First thing I noticed is that vCenter spilled out an error message under Network status, as shown in the figure below. 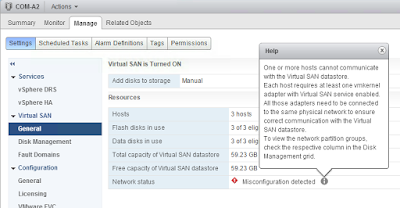 From what I’ve been able to gather, this is a genetic error message that means something like “Something is going on with the Network and I, vCenter, have no clue what it is. Go grab the Network Administrator and the two of you go do some Network troubleshooting. Don’t forget to check the Network Multicast configuration while you are at it”. By the way, you will also lose some of the Virtual VSAN monitoring capabilities that vCenter provides.

Now, looking again at the picture above, notice that the Total capacity of Virtual SAN datastore is 59.23 GB. That’s because each of the 3 original Virtual SAN nodes (the 3 that are in the same vSphere cluster) is contributing 20 GB (plus 4 GB SSD) to the Virtual SAN Datastore. And more importantly, the two new nodes (cuarto and quinto) were able to access this new Datastore, a fact that will must definitely intrigue the Security Administrator.

Here is a screenshot of the fifth host’s Datastores.


You won’t get an acknowledgement that the join was successful, so run this command to confirm the Virtual SAN disk group got created:

Back again in vCenter, it will report the storage we just added by adding it to the 59.23 GB from earlier. Now the Total capacity of Virtual SAN datastore reads 78.97 GB: 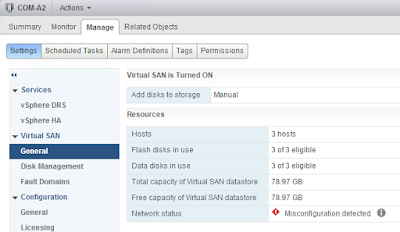 Let me stop here since the lunch break is over and everyone must get back to work.

Elver’s Opinion: The vSphere Administrator thinks this is awesome. Although not supported by VMware in Virtual SAN 6.1, the foundation is already embedded in the Virtual SAN code to support a Multi-vSphere Clusters Virtual SAN deployment. One application that quickly comes to mind: a single dedicated Virtual SAN cluster for the vSphere environment’s storage needs that can be quickly and relatively inexpensively scaled up.